On the 29th January 2009, the Emirates limo arrived on time in front of my building. It was a very foggy day. I was doubtful that our plane could take off from the airport under such poor visibility, less than 50m! 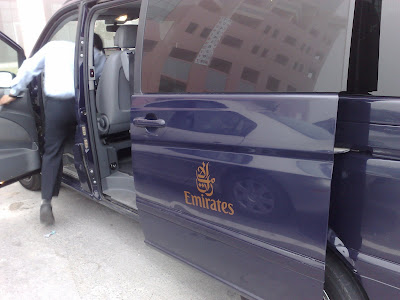 It was my first time departing from Terminal 3 Dubai. They said it is huge and one needs to be athletic to cover the walking distance. I did online check-in the night before so I wasted no time at the counter. I tried to get the E-gate pass so that I would not get stuck in the long queue at the immigration check point. I paid 200 dirham but it was returned because my thumb prints, both left and right, were not readable. They tried on my other fingers - all negative. So I took back my money and threw a thought that I should have been a professional criminal, for I have the advantage of doing my things and leaving no fingerprints that could be traced. I met my colleagues at the business lounge and had breakfast. 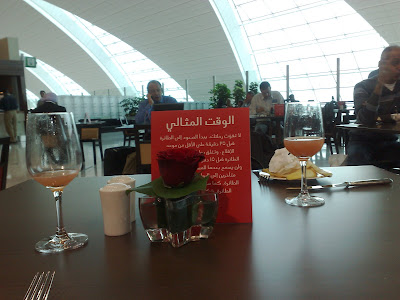 We walked to the departure gate and there was a huge crowd waiting to board the Boeing 777 to Manila. There were so many Pinoys in the crowd and my appearance allowed me to blend well with the crowd. The big crowd was then dispersed as we came to know that the flight as well as other flights scheduled this morning were all delayed due to the thick fog. Great! So we headed back to the lounge. I surfed the net and then after a few hours, I got bored. 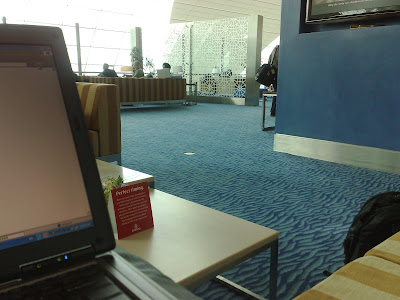 Our 10:30 AM flight was delayed for about 4 hours. We got into our plane after 2PM. I was happy to get the window seat and next to my seat was vacant. The best priviledge one gets having to be in the business class is the ample space to stretch the legs; which I really appreciated in our 9 hours flight. 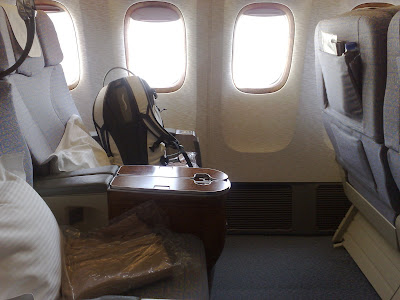 The stewardess addressed me by my name, pronounced correctly. Food was served in glassware on a white cloth. As the plane took off and steadied its way eastward, I peeked outside occasionally, to witness the magnificent earth contours. The one below was the bird's eye view of a spot along the Persian coast. 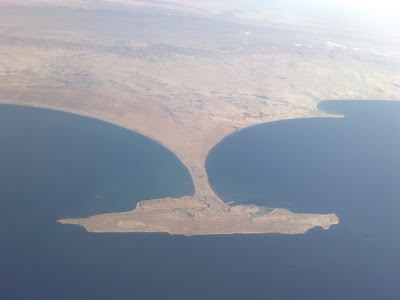 I ate and then tried to read but I slept after a few pages. It was a good sleep, interrupted only by a soft call for late night snack and a couple of nature's calls. The 9 hours didn't seem to be that long having the comfort to doze off most of the hours. 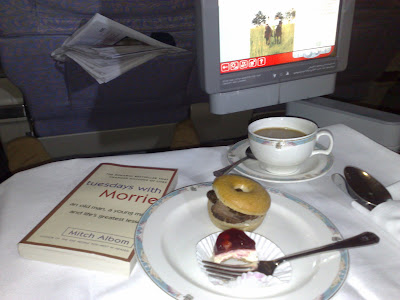 We landed the Manila Ninoy Aquino Airport at about 2 AM. I read through the entry regulations on the handouts. One thing that strikes me was that the Philippines has rather strict rules on intellectual properties and copyright enforcement. No pirated VCDs and DVDs are allowed to be brought into the country, as stated on the handouts. This prohibition appears about the same way they view the illegal trafficking of drugs and other serious stuffs. Their airport was not as modern, brightly-lit and polished as KLIA. Things are there for functional reasons, little has been done to impress the first timer like myself. We reached our hotel at the wee hour. We agreed to delay our schedule the next day by 1 hour. I hurried to crawl under the blanket to end the day. 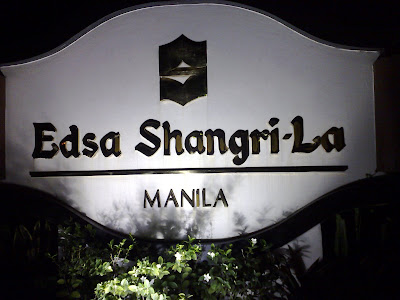 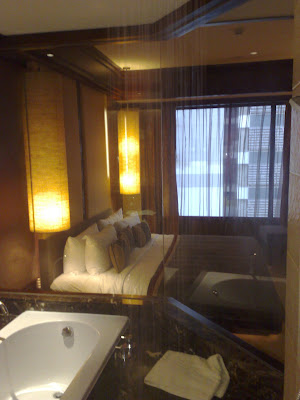 We started our first day with a list of 16 shortlisted candidates to be assessed and interviewed. The candidates were divided into 2 groups and we gave them a group task and observed the group discussion. In between the sessions, we assessed their written electrical and mechanical competency tests. Then we had individual interviews. The same routine was repeated on the next day when we had another 16 shortlisted candidates. We were drained by the end of the days and barely had the energy to do other night activities other than just to dine and sleep. The only sight seeing of Manila that we had was the view from the 17th floor of the hotel building that presented part of the central Manila and Makati. 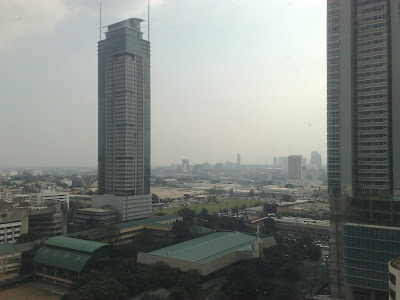 The economic situation in the Philippines is affected especially in the semiconductor and electronics industries which have retrenched many workers. The local newspapers reported that due to the global financial crisis more Pinoys would get poorer. We finalized our selection and brought hopes for promising future in Dubai for 9 of the selected candidates. To some other especially those who came with over-confidence and the attitude of I-know-everything, they had been intimidated in return and none of these guys fit into our company's associate's profile. We thanked them for coming and wished them good luck. 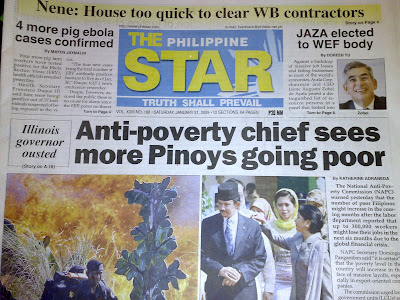 We had just the Sunday for fun. Having lived in a safe and blessed places in Malaysia and Dubai, the idea to visit the smallest active volcano in the world really thrilled us. So we went off to a place called the Tagaytay where the Taal volcano is erected from the Taal lake. It was about 1.5 hour drive from Central Manila. We drove up to a vantage point and enjoyed the splendid view. 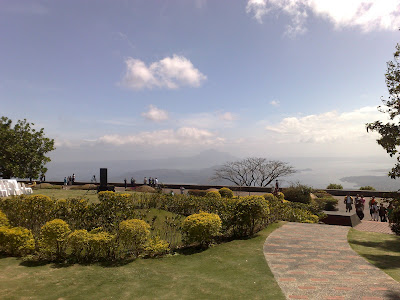 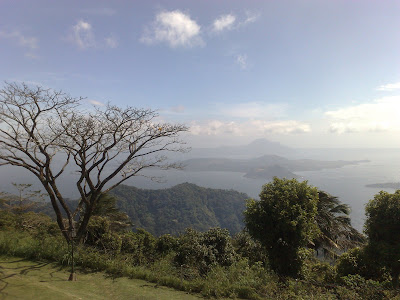 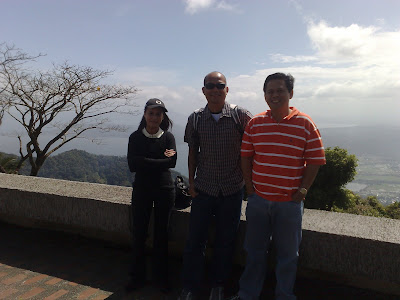 There was an option to get closer to the volcano and we were adventurous enough to go for it. We drove down to the water edge and rented a bangka, which is a boat with the side extensions that spread like wings. We headed to the other side of the lake to get a closer look at Taal volcano. 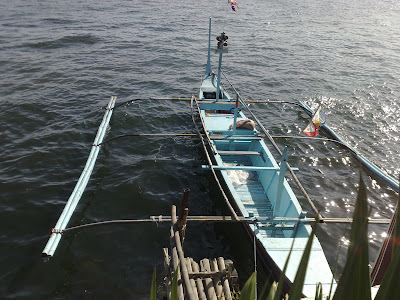 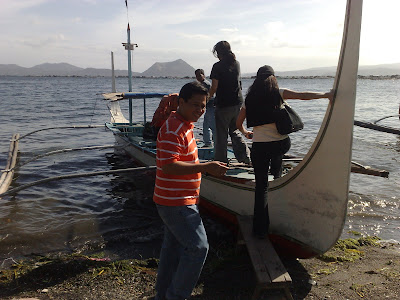 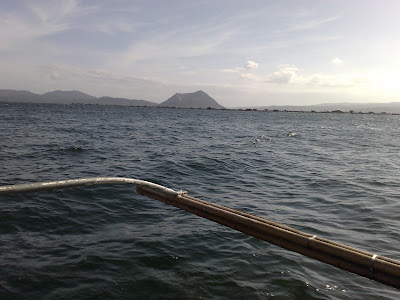 It took us about half an hour to get there. Initially, it was fun but half way through, we had too much of water splashed on us. The ladies just had it when the Gucci bag got wet and they got too soaked. So when we reached the other edge of the lake, they got themselves a well covered rain-coat and wasted no time to head back. The complete package for this tour included a 5km horse-back riding to the volcano crate which I would like to complete it one day when I travelled with more compatible companions. 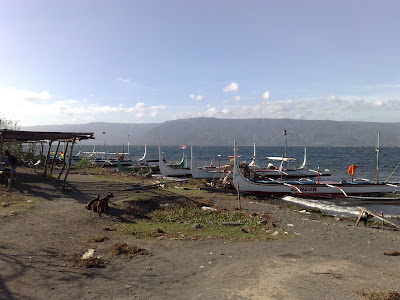 The Philippines is an archipelago, proned to typhoon, volcano eruptions, landslides, mudslides, earthquake and flood. It is highly populated and a big portion of the population live below the poverty line. The common aspiration of most of the poor little boys and girls in this country is to find their way one day to work outside their country and bring back wealth to support their roots. The majority of poor people here live simply, work hard and are forced to be resourceful. Yet when you meet most of them, they are happy and hopeful. They give me a good insight of being optimist in a hard life. I am sure I have another good insight, the Vietnamese version, next. 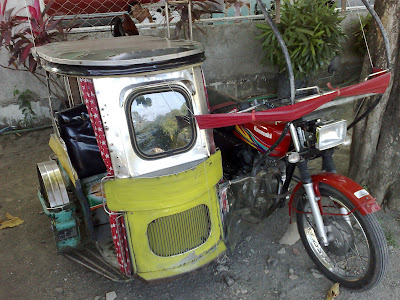 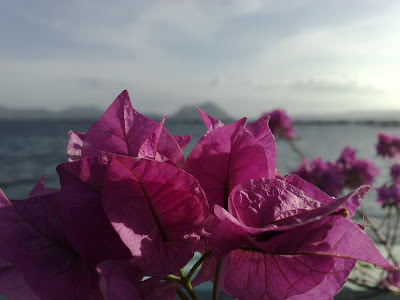 awwwwwh, your pics remind me of my time living and schooling for two years in Makati back in 79-80...

And to see Bangka still exists and being used after all these years (we also took a Bangka and went to Mindoro Island down-south amid turbulent seas)... aiyo, macam timewarp la that country, ey?

Salamat po.....
I still remember having my 1st earthquake experience in Makati....I thought the room was haunted as the glasses on the table moving and shaking, the floor trembling.... and the receptionist calmly said.."sir, we experienced a mild earthquake"....Nasi Briani in Malate is nice and rich though....

'The room was neat and comfortable except that it was kind of awkward to take shower in a glass panelled bathroom, visible from many angles.'

as i think, the bathroom will create a very sexy ambience. and its an 'IN' thing i guess.

we used to propose a sexy bathroom without door and open to the sky. cool huh?

Business and leasure..way to go Jumper!

ohhh..i love the photo of the persian coast!!

during my uni days back in Glasgow, one of my proposal on west end housing was a bathroom with a full height clear glass wall for master bedroom...haha

not just the sexy ambiance but it creates a dialog between the two rooms...

Oh well, the area for each houses is small...it makes the master bedroom looks big too!

RKM,
I didn't know that you lived among the Pinoys in those years and had the adventurous life of an island princess. Indeed, it's populated but preserved Philippines, just like living in the time warp, as you put it.
Thank you for tagging. I'll definitely get it done before 2010.

orangmuar,
There were many signages that remind us not to use the elevator in case of earthquake. Alhamdullillah, the earth didn't shake when I was there. Eating tanpa was was, was a bit of a challenge at Makati. There I had become a seafood enthusiast and a vegetarian. There was little time to search for the nasi briani in Malate. You seem to know the place like you were born there?!

Hady,
So you like it, huh? Well, I walk around my apartment naked and feel comfortable with it. But having to do that in a hotel room is a bit of a concern. The last thing I want to see in the You Tube is to find myself there caught in the act by a hidden camera.

Al Khalifah,
Thanks for dropping by. Have a nice day!

Ms. D,
So I was wrong to say that the interior designer who came up with the idea could possibly be the maniac patron from the red light district. It has indeed become a modern day aspiration of transparent living.
So are you dating Hady? I feel a lingering aura of affection after both of you came for a visit to my blog...
Anyway, thank you for visiting Ms.D. You're always welcomed.

"So are you dating Hady? I feel a lingering aura of affection after both of you came for a visit to my blog..." 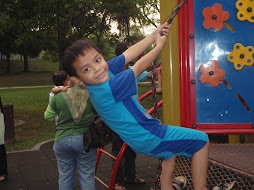